Wahwah.fm Turns Your iPhone into an Internet Radio Station 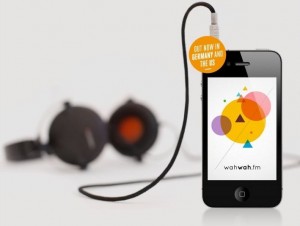 Fancy seeing what your friends are listening to on their iPhone or iPod? Want to get an insight on your favourite artist’s guilty pleasures? Want to share your top tracks for the morning commute? Wahwah.fm can do just that!

Wahwah.fm has the power to convert the music stored on your iPhone into an internet radio station that gets broadcast worldwide, or to other people near your location. Not only that, you can also check out what other users are broadcasting.

“Wahwah.fm allows every person in the world to become a live broadcasting radio station,” said Ari Stein, Wahwah.fm’s head of communications. “You choose your music, you press play, and the second you press play, you’re live and on air. Whatever you’re playing at that moment, anyone else can listen to you.”

The app scans your iPhone’s library, allowing you to include all identified tracks in your playlist. You can select individual tracks just in case you have something particularly embarrassing on your playlist 😉

As well as broadcasting you can, of course, listen to other people’s stations too.

Just ‘follow’ them through the app and check out their tunes.

“Wahwah.fm has a live feed, every second, of users coming in that are broadcasting their own music,” added Stein. “You can choose [stations to listen to based on] the person, the channel, and the songs that are playing at that moment. It’s like sifting through shortwave radio, and at any time, you can stop and listen to the song you want.”

“If you get off the plane in Buenos Aires, New York, or wherever you are, the closest users show up immediately,” said Stein. “Immediately, you get a perspective into the local music scene.”

Wahwah.fm is a free iTunes app and was released about three weeks ago in Germany where the company is based and it has now found its way over in the United States app store this week.

I reckon we should hassle them to release it in to the UK app store!