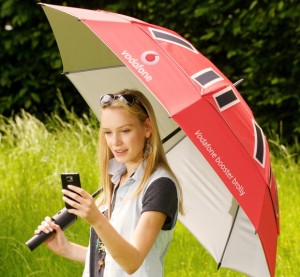 There’s two things that you can guarantee at a UK Summer festival – it will rain and your mobile phone will die. Thankfully Vodafone are in a position to make those two definites work in your favour thanks to their Booster Brolly.

I remember the festival days where, if you were split from your pack in the pit you had to sort out a regrouping point – generally near a beer tent. These days a swift text get’s you back with your buddies, but only if you all have live phones.

The thing about fields in the middle of deepest Ruralshire, plug points are a tad scarce. What generally isn’t, however, is rain.

Designed in partnership with University College London, the Vodafone Booster Brolly is a prototype parasol to keep your phone charged and your hair dry – win!

Vodafone claims the Brolly will charge a smart phone battery in under three hours, by plugging into a USB port in the handle.

Vodafone reckons this will wirelessly boost your 3G signal – with the annoyingly increasing amounts of oversized flags featuring ‘ironic’ and ‘iconic’ subjects no one will even give you a second glance when you hold your umbrella aloft to get a better signal.

You might even make new fest friends as anyone standing under the Booster Brolly gets a signal boost.

An added bonus is that there’s also a handy LED torch ideal for making your boozey way back to your tent. That should prevent you tripping over ninja guy-ropes and comatose students that have just realised what an ‘all-dayer’ means.

The Booster Brolly makes its prototype debut at the Isle of Wight festival on 22 June.

If your phone does die and you haven’t pocketed a Duracell charger – look out for the Vodafone charging truck and leave your phone in a charging locker for a bit. It’s protected by a high-tech palm-print scanner for security. You’ll spot them at Isle of Wight, Global Gathering, Latitude, T in the Park, as well as Reading or Leeds.