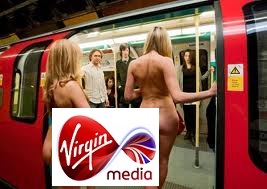 Free Wi-Fi has been promised for a number of years on London’s tube system but now, Olympic tourists will be able to hop online whilst and Tweet that they’re waiting ages for another crammed subterranian train to squeeze themselves on to.

A further 40 stations will be Internet-ready by the end of the year – in order to use the interwebs after the end of the Paralympic Games in September you’ll have to be, like me, a Virgin Media customer.

Non-Virgin Media passengers will still be able to access TfL’s live travel information but, that’s it.

A spokesperson for Virgin Media said the free service will launch ahead of the Games’ opening ceremony and last for the duration of both Olympics and Paralympics, but couldn’t give specific dates.

Mayor Boris Johnson, London’s most famous comedian, waffled: “This is a fabulous new and free resource which will be in place from this summer when London is being showcased on a global stage and playing host to millions.”

Gareth Powell stated that “We’re upgrading the Tube to make it fit for the 21st century,” London Underground’s director of strategy and service development went on to say that “This latest innovation is great news for Tube customers, who now have access to emails, web and social media underground for the first time.”

The plan announced today was promised back in February last year supported by O2, Vodafone and Huawei, although no one said anything about it becoming exclusive after the Olympics.

Glasgow’s subway has had free wireless since late 2010, while a plan to provide mobile phone coverage on the capital’s Tube was pulled back in 2009.

Are you looking forward to free Internets at your Tube station? Will you be avoiding the Underground like the plague for the duration of the Games? Or are you a Virgin customer from elsewhere in the country wondering why your subscription fees are being used for this?