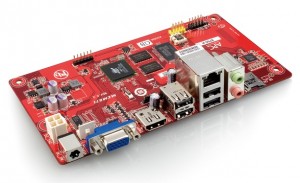 There seems to be run on low-cost computers recently but Taiwanese electronics company Via’s APC comes in at a skinflint pleasing $49.

It might not handle a load of computing tasks but it’s probably one of the simplest ways to get online.

In the engine room sits an 800MHz processor, 512MB of DDR3 memory, 2GB of flash storage, and can connect to a monitor or TV to output a resolution of up to 720p.

It also sips at the go-juice: 13.5 watts at maximum and only 4 watts when idle.

As you’ve probably worked out by the picture above, the APC comes caseless.

Based on a new form factor, Neo-ITX, it will slip into any case designed for a Mini-ITX or microATX machine.

The choice of Android is bordering on baffling – especially since Via had to redesign it for optimised mouse and keyboard support.

I’ve no idea why they didn’t decide to use Ice Cream Sandwich as that already supports hover events and better mouse interaction.

Furthermore – wouldn’t a lightweight PC Linux build have been the easiest way to go?

The APC should go on sale this July, and pre-orders will apparently be starting soon.

Check out the vid below: