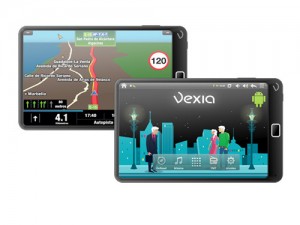 Let me just get this out of the way early on. Navlet. WTF? It sounds like the name given for the baby offspring of Pandora’s Na’Vi from the film Avatar. Spanish tech firm Vexia has decided that this will be the moniker for a new breed of Sat Nav/tablet hybrids.

OK, so the Vexia Navlet is the result of a basic Android tablet getting it on with a car Sat Nav.

The Navlet is Wi-Fi only and chugs along on Android 2.2 Froyo (you weren’t expecting Honeycomb were you?) and comes in 5 and 7-inch flavours with a screen resolution of 800 x 480 pixels.

So far there’s nothing that will trouble any of the main tablets out there at the moment but then the Vexia Navlet isn’t looking to go toe-to-toe with the iPads and Transformer Primes of this world. The plan is instead to offer a budget best-of-both worlds – a usable tablet coupled with the smarts to get you to where you need to go.

Talking about getting you where you need to be the Navlet is said to hand you “advanced GPS navigation software”, lane assist, tunnel/pedestrian mode, the ability to update maps via the Vexia website and a range of other features that come as standard on navigational devices, including current speed”.

Under the hood is a 1GHz processor, a motion sensor, and a MicroSD expandable memory to offer you up to 32GB of storage for your apps, videos, music, etc.

The Navlet may well be a new niche but are you tempted to buy Vexia’s offering or would you rather get an up-to-the moment tablet and furnish it with a SatNav app? I can just imagine a 10-inch tablet mounted on the dash 😛

Prices for the Vexia Navlet start at £165 for the 5-inch model.