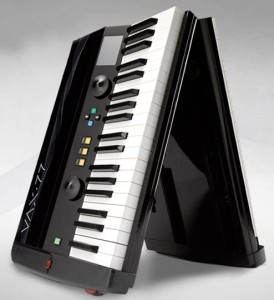 Ever since joining my first band in 1989 playing such joys as Van Halen’s Jump, Don’t You Forget About Me by Simple Minds and Incommunicado by Marillion, keyboard players have tended to be the most geeky of the band bunch.

They generally had the money, the latest toys and took up the most power points.

It always seemed ironic to me that their gear was second only to the drummers for being unwieldy.Â  A full size synth in a flightcase is not what I’d call luggable.

Why has it taken so long for something like the VAX77 which logically folds in half (to just 23 inches)?

The VAX77 will actually be officially unveiled at NAMM this January.