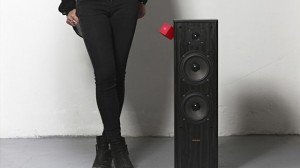 Do you happen to have some old hi-fi speakers in the attic or garage? Have you upgraded from bookshelf to floor-standing units? Well, you could convert those redundant noisemakers into nifty Bluetooth speakers.

The London-based Paul Cocksedge Studio is raising funds on Kickstarter to further develop The Vamp.

The Vamp is almost a cube (similar shape to the Boxee) that attaches to any speaker and adds Bluetooth capability.

Instead of buying new Bluetooth speakers, The Vamp will kinda upgrade your old speakers as explained in the video below.

The Vamp attaches magnetically to a speaker with an included metal disc and its in-built battery powers the speaker. Once connected, your Bluetooth devices such as your smartphone or laptop can squirt sound direct to your previously defunct speaker.

The Vamp has a USB charge socket, red and black speaker connectors and a headphone jack.

At the moment, The Vamp can only output mono sound, but still seems a great way to get wireless from an old speaker.

Backers who pledge at least £35 pounds will be among the first to get The Vamp in red, white or black.