Use Your Nokia Phone to Make Your TV a Touchscreen! Plug and Touch 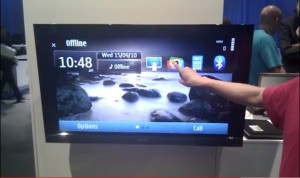 This is Nokia Plug And Touch which has been shown off at Nokia World right now.

Nokia Plug And Touch is not all stardust and unicorn tears either – grab a phone, a Nokia N8 seems to do the trick, connect it to your telly (via TV-out, or in this case, HDMI out), rest the blower in front of the gogglebox which then uses the camera to work out where you are, and to recognise gesture inputs about an inch from the screen.

At the moment you can use single taps and swipes to scroll but there’s the promise of pulls and stretches to zoom in on pictures.

Nokia Plug And Touch is still a research project (At the Beijing Nokia Research Centre), but itâ€™s been tested on both Symbian 3 and Symbian S60 5th edition touchscreen phones – so, soon your pocket Nok could give you special powers. Imagine hooking your phone up at your parents home and then waving your arms in front of their TV to change channel – witchcraft! 🙂

Check out the demo below – yeah, it’s a bit clunky at the mo but hey, it’s a start!