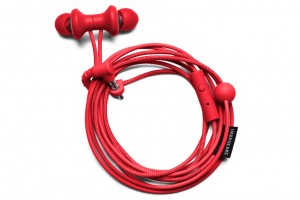 One of the more annoying elements of using headphones and earphones is what to do with the cable where they’re not in use. Well, the latest set of earphones from Urbanears, called Kransen, has two unique features which together keep its cords tidy and untangled.

Surely I can’t be the only person that suffers with this problem. No matter how tidily I wrap the cables up of headphones and earphones I put in my courier bag, they always seem to get knotted and tangled. I’ve checked my bags for pesky gremlins that love to practice their knots on audio cords but the little blighters seem to be well hidden.

Urbanears have managed to solve two problems with their Kransen earbuds. As well as building-in some brilliant cable management, they have also made the buds themselves fasten in a way that keeps them around your neck when they’re not in use.

Snap Construction connects the two earbuds back-to-back and Cable Loop secures the coiled cords via some supple acrobatics of the plug.

Von Euler-Rudbäck and the team was inspired by everyone’s favourite construction toy, Lego. They do admit that that their version of the snap-together design is fairly low-tech when compared with Lego’s precision engineering, though. Urbanears use a material that is a lot more flexible than Lego which not only allows the ends of the buds to snap together without them having to be perfectly produced, but the material also cuts down on the noise disturbance caused by the cord, I’ve been told.

Urbanears placed the male end of the snap on the right earbud because, earlier in the design process, they had decided to add a microphone on the left-side cord and, for aesthetic reasons, they wanted to distribute the extra components as evenly as possible. 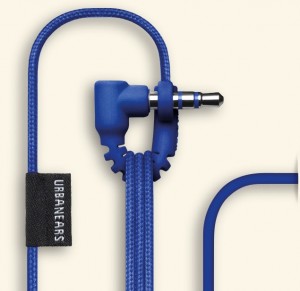 To make the snap more universally beneficial, it needed to be paired with a complementary innovation — hence the addition of Cable Loop.

For Cable Loop, the designers saw an opportunity in utilising the plug-end of the wire. If they made the plug’s casing bendy enough and add a hole at its foot, then the plug itself could be arched and the tip threaded through that foot to make a loop. This simple and secure fit would be enough to hold a coil of cords tight.

This means that the loop acts kind of like a lock, stopping bundled cords from wriggling away. And it should work no matter how you like to coil your headphone cords.

As the connections of the cable to the jack, and the cable to the earphones are usually the weak links in cabled ear-pleasers, I hope that the extra stress on the jack end has also been taken in to consideration.

I’ve not tested these earbuds out for sound quality yet, but it was the design solutions to a couple of common issues that grabbed my attention.

The Krasen earphones are £35 direct from Urbanears.

Have you a set of these? How do they sound? Please let me know.