UK Xbox One apps available on day one: Netflix, Lovefilm and more 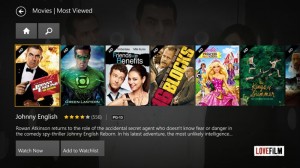 Amazon has announced that their movie and TV show streaming service, Amazon LoveFilm is now available on Microsoft’s next generation games console, the Xbox One. Let’s have a look what else is available.


The Amazon LoveFilm app is available from the Xbox One App Marketplace from today, and it comes with support for full HD video in 1080p and Dolby Digital Plus 5.1 surround sound, it also comes with Amazon’s Whispersync technology.

The battle of the consoles could be won or lost on the strengths of other capabilities away from gaming. Whilst we’re still waiting to see which services the UK PS4 will get on November 29th the rumours are that it will initially be fewer than the Xbox One’s offerings.

Here’s the other streaming and on demand services what will join Amazon LoveFilm:

Jogging to catch-up with the list above are Demand 5, Sky’s Now TV, Blinkbox, Muzu TV, and Wuaki.tv. It sounds like the PlayStation 4 will beat the Xbox One to BBC iPlayer, though.

This list contains the things that you’d kind of expect but also need if you’re not to become a laughing stock for PlayStation owners.

What do you think? Are these enough to give the Xbox One the edge?