UK Votes Being Beamed onto Big Ben in Real Time 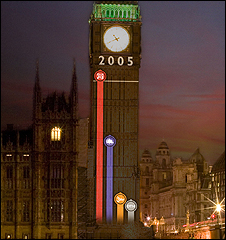 In a matter of hours we will be taking our voting slips and deciding who will be the Prime Minister.

Gadgety fans may be interested to know that the results will be projected onto Big Ben; well, St Stephen’s Tower if I want to get picky 😉

They will provide a running tally of the number of seats won by Labour, the Conservatives and the Liberal Democrats, along with those gained by the smaller parties and independents combined. In the minutes after polls close on 6 May, the details of an exit poll conducted by NOP/Mori will be beamed onto Big Ben, under an agreement between the BBC, ITN and Sky News. The results projection, which will be removed after dawn on 7 May, will feature a “winning line”, representing the 326 seats that any party will need to win to be sure of an outright victory.