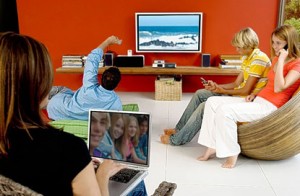 A UK study of those under 25 year-old has proven that my way of watching the telly is the norm these days.

Watching the idiot box is just not enough.

Whether watching an episode of ‘Being Human’ or Star Wars again eight out of ten respondents to the British survey said they use some form of social networking (mainly Twitter) while watching their favorite programmes.

I know a load of people that are now incapable of watching a football match on the TV without constantly updating Facebook and/or Twitter.

You can argue for or against this multiscreen social viewing but 34% of those polled said chatting while TVing is “fun,” with another 32% saying it was “more interesting” than just watching TV all by its boring self.

Is it the lack of quality programming or is the interwebs actually making us more social?