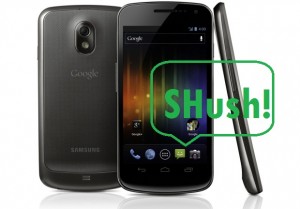 I only wrote about the UK release of the new Ice Cream Sandwich equipped Samsung Galaxy Nexus yesterday but there already seems to be hoards of unhappy ‘droid fans thanks to a dodgy volume control.

It is not the kind of attention Samsung was hoping for when they unveiled the Galaxy Nexus at a joint bash with Google Android 4.0. The Nexus arrived on UK shores on Friday and the forums are already ablaze with disappointed customers complaining that their new mobile has an annoying glitch which causes the volume on the phone to spontaneously drop. Now, that *is* annoying!

It appears that this does not just happen when playing music or vids – it also occurs during phone calls which kinda negates the whole point in having a fancy phone doesn’t it?

The issue means the Galaxy Nexus could suddenly go silent without warning, meaning you miss texts or other notifications as well as the obvious and more irksome conversation problem.

You can see the extent of the unhappiness by checking out the Google issues board and the place that I first became aware of the issue: good ol’ Samsung UK’s Facebook page.

The XDA Developers forum has been investigating what’s causing this problem and they’re thinking it’s hardware-based which may lead to Samsung recalling all the current batch of Nexuseseses… err… Nexi? They also say that the volume bug only seems to affect the phone while it’s on a 2G connection (when the Edge or GPRS symbols appear), and seemingly only affects models that use 900MHz for 2G coverage.

There is word that the volume button has been totally unresponsive so that the owner is unable to rectify the loss in sound. Also, the power button seems to want to join in on the anarchy by refusing to lock the Nexus.

So – is this going to be a total Nexus recall or a swift software update? I’ll let you know when I hear from Sammy.