UK Robot Tests Own Hypothesis – Not Yet Applied For Research Grant 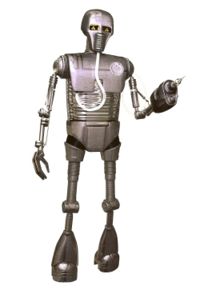 A robot named Adam is reported to be the first robot ever to independently uncover scientific knowledge.

The robot’s AI made a hypothesis about the genomics of a yeast, thenÂ planned a test for the hypothesis and finallyÂ carried outÂ the testÂ in its lab.

The results were thenÂ replicated by human scientists later, confirming that the robot hadn’t cheated and wasn’t just trying to impress the Professor to get a research grant and that chip upgrade that its had its visual sensor array on for a while.

Prof Ross King, who led the research at Aberystwyth University, said: “Ultimately we hope to have teams of human and robot scientists working together in laboratories”.

Prof King continued: “If science was more efficient it would be better placed to help solve society’s problems. One way to make science more efficient is through automation. Automation was the driving force behind much of the 19th and 20th century progress, and this is likely to continue.”

So, do you see this as a great leap forward or just a small step forward into the reality of humans becoming obsolete and slaves to our mechanical overlords?

The news came from Lab SpacesÂ and the pic from Wookipedia