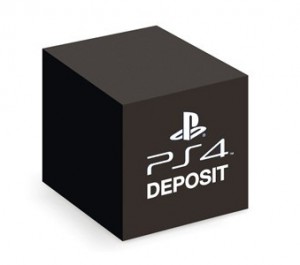 The PlayStation 4 has been announced by Sony, but there are no pricing details or exact release date beyond “Holiday 2013” yet – I mean, we don’t even know what the console looks like! You can pre-order it in the UK though.

Just because we haven’t been given a UK release date, price or any hint about how the PlayStation 4 will look, there’s plenty of retailers out there listing it as available for pre-order already.

Game was the most eager to get a pre-order page out and live and managed it pretty much as the console was launched. That eagerness nearly caught Game out, however, as the retailer had forgot that important word  “deposit” – so it did look as though they were selling the next-gen console  for £20 – did anyone manage to jump on that?

Other UK retailers are inviting you to register your interest. Amazon.co.uk

has an whole section dedicated to PS4 and some of the launch titles – DriveClub, Infamous Second Son, Killzone: Shadow Fall, The Witness and Knack – but only to sign up to be notified about when they might become available.

Are you going to sign up or are you waiting to see how the Xbox 720 compares?