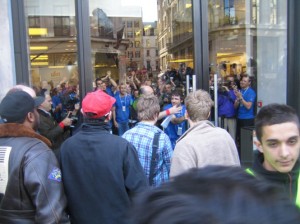 Now that the dust is settling after UK iPad day it’s time to look back at the news from a while back which predicted a huge fail for the iPad here in Blighty.

A certain Mike Stevens, director of Telecoms Media and Technology at Simpson Carpenter will probably be chowing down on a rather large chunk of humble pie right now.

Remember his claim that the iPad’s initial sales would be down to “an impulsive minority [who] will simply have to have it”.

It seemed that the impulsive minority had queued up from the day before the release day and this small faction were still there outside the Apple Store in Regent Street, London at 3.15pm on launch day, 7 hours after the doors opened.

According to the Regent Street Apple Store over 2,000 had past through the doors that morning. Hmm…. Â£500 x 2,000 – not a bad morning’s work for one store catering to an impulsive minority.