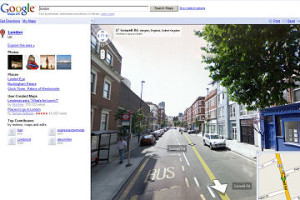 It seems thatÂ Google Street View UK is up and running.

Found this out by accident this morning – but hey!

We know that those Google street cars have been cruising around but now we can see the results of those 360Â° horizontal and 290Â° vertical camera pictures.

This serviceÂ has been around in the United States since 2007 and is gradually spreading across the planet – and perhaps even Mars.

The UK version has gone live only after the information commissioner gave the service the go-ahead after Google agreed to blur individual’s faces and the number plates of cars.

It does seem, however, that the blur-ware isn’t that good in poor light but occassionally there are clear pics of folk going about their day-to-day business.

But let’s face it – living in London I’m sure I’ve probably been inadvertently snapped and more than likely appeared on Flickr or Facebook without my knowledge.Â  I know for a fact that I’ve appeared on tele a few times (Cash In The Attic for example had me walking through Soho!).

How to use Google Street View UK

Anyhow the UK Streetview is up and running so go and check out theseÂ cities – you never know, you might be famous 🙂