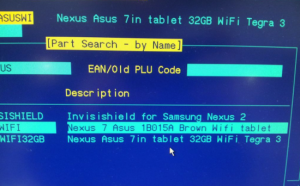 Carphone Warehouse is preparing for a double Nexus delivery but the looks of their stock system.

There is mention of an Invishield screen protector for none other than the ‘Samsung Nexus 2’.

There has been chat about a second-gen Galaxy Nexus phone coming but the betting seemed to be siding with LG producing the latest Android smartphone. The software will unquestionably be Jelly Bean 4.2, an update to the software that launched earlier in the year on the Nexus 7 tablet.

It does make sense, however, for Google to stick with Samsung again for the updated Galaxy Nexus.

Spec for the Samsung Galaxy Nexus 2 would mostly likely incorporate a 4.65-inch Super AMOLED display, 1.5GHz dual-core A9 processor, 8-megapixel camera and 16GB of storage with a micro SD slot to back it up.

As well as the new Nexus phone, the system screenshot also hints at Google launching new versions of the Nexus 7 tablet.

One point I have made before is the lack of a microSD card slot to increase the Google tablet’s storage. Well, seems that someone has been listening.

Although it wont be expandable it appears that a new roomier 32GB model will be landing soon and, going by Google’s prices, this will probably cost around £249.99.

Finally, and perhaps most strangely, is a ‘Nexus 7 Asus 1B015A Brown Wifi tablet’. The product is labelled differently to the 32GB Nexus, but it looks likely that Google will refresh things before the end of the year with new colours.