UK Gets Very Own Kindles in Grey Business Suits 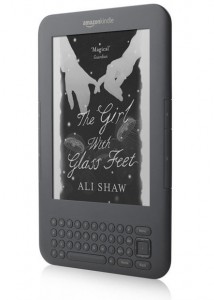 The Kindle is coming to the UK – it’s official!

Amazon is treating us with brand spanking new versions of the ebook reader.

The pair of Kindles aren’t that scary pricewise either. If you opt for the one loaded with 3G and Wi-Fi it’ll cost you Â£149 and the Wi-Fi only version will hit you for a reasonable Â£109.

The free 3G connection taken care of by Vodafone and should you take your Brit Kindle (UKindle?) on a trip to foreign parts you’ll be able to instantly browse and download ebooks as long as they have 3G. I reckon that it’s worth that extra Â£40 compared to the Wi-Fi only version.

Especially as the Amazon Web site for pre-ordering states that the new Wi-Fi browsing is “experimental”!

Both of these new Kindles wear stylish graphite coloured suits and sport a higher contrast eInk screen, 4GB of memory which is said to equate to “up to 3,500” eBooks and a claimed battery life of up to one month even when frequently used.

or here for the Kindle Wi-Fi only

Both will ship on 27 August along with a UK specific ebook store featuring over 400,000 titles, newspapers, magazines and over 1 million free books.