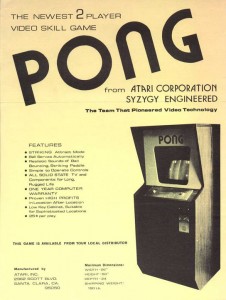 At the same timeÂ Pong, the worldâ€™s first successful video game, hit the market.Â  Nobody could even begin to guess howÂ big video gaming would become.

But it has becomeÂ huge; both financially and culturally.Â

So much soÂ that people are taking steps to ensure the preservation of the mediumâ€™s history.

On September 19th, Nottingham Trent University (NTU) announced the creation of the UKâ€™s first official National Videogame Archive (NVA), a joint venture between Nottingham Trent University and the National Media Museum in Bradford, which will catalogue gamingâ€™s history â€œfrom the humble beginnings of 1972â€™s â€˜Pong,â€™ to the blockbusters of the 21st Century.â€

The aimÂ of the NVA is to â€œpreserve, analyse and display the products of the global videogame industry by placing games in their historical, social, political and cultural contexts.â€

So we’re not just talking about a collection of consoles and cartridges here!

October also sawÂ the announcement ofÂ the Archiveâ€™s related initiative, Save the Videogame, where game developers have already begun making their cases for games they believe are worth preserving.

Check out: National Video Game Archive and Save The Video Game.