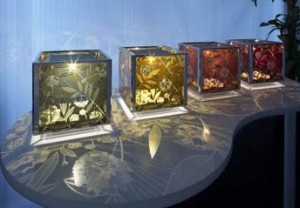 I was honoured with being one of the first members of the press to actually be shown around the Future Technology lab at Sony‘s R&D base in Stuttgart.

The lab’s General Manager, Dr. Gabriele Nelles, spoke to us about the clever dye-sensitised solar cells that they are working on – the Hana-Akari lamps (pictured) were exhibited at Eco-Products 2008 which was held at Tokyo Big Sight, Japan.

The Hana-Akari table lamp (Hana= flower, Akari = light in Japanese) shows that solar cells, dye-sensitised solar cells or DSSC to be precise, can be good looking.

The patterns are painted onto the glass plates with sensitiser dyes which will allow the lamp to absorb light thus generating enough electricity by diffused illumination to drive a small fan.

The dye-sensitised solar cells used in those lamps have a module conversion efficiency of about 4%.

The sensitiser dyes are obviously the key materials in DSSCs.

New sensitiser dyes were developed at Sonyâ€™s Materials Science Laboratory (MSL) to absorb more sunlight which further increases the conversion efficiencies of such photovoltaic devices, the additional variety of colours that this provides for product design make it a more viable solution to be incoropated into household products.

Although Sony doesn’t seem to be aiming to release these products themselves it looks as though they are still working hard to explore the possibilities of these dye-sensitized solar cells.

But why is Sony working on this anyhow?

Well, the power consumption of portable electronics is steadily increasing (iPhone anyone?) but the theoretical limit of the much used Li-ion battery will soon be reached.

Therefore the next generation of portable energy devices could be a hybrid energy device with a solar cell as a power generator.

Dye-Sensitised Solar Cells are a promising technology to realise such a hybrid. These relatively new photovoltaic devices imitate the way plants convert sunlight into energy.

A 150 mW prototype of a dye-sensitised solar cell module is shown which can generate enough electricity to drive an MP3 player (see in the gallery below).

Their excellent performance in diffusing light gives them a competitive edge over silicon by providing electric power for both indoor and outdoor standalone electronic equipment.

Application of the DSSC in building-integrated photovoltaic has already started and will become a rich field for future commercial development.

At Sony MSL a new class of metal free sensitiser dyes is under development, the so called Squarylium dyes. The aim is to design dyes that enable a broader absorption of the photons, in particular those of the long wavelength region.

One unique new dye has already been developed and realised, â€˜Solar Greenâ€™ (Dr Gabriel and her team call it ‘The Champion’ in the lab), which fulfills the aim and also shows increased efficiency when applied together with other organic dyes in the solar cell.

So, perhaps in the not too distant future we’ll be seeing this kind of tech in our homes, on our mobiles, mp3 players and perhaps as arty stained-glass windows that generate enough power to light the room or even entire home.