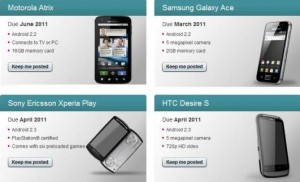 According to the network operator’s Coming Soon page the Android 2.4 packing, 1GHz powered HTC Desire S will be available in April.

If you’ve read GadgetyNews before you will have heard about the Xperia Play – Sony Ericsson’s PlayStation Phone runs on Gingerbread, has a 4-inch screen and is the first Android with a slide-out gaming pad. It touches down with half a dozen preloaded games and will be backed up by another 50 to buy from its dedicated PlayStation Suite store. T0Mobile has this release dated as April.

The ‘Most Powerful Android Phone‘ – Motorola Atrix is very clever as well as powerful. It comes equipped with a dual-core processor under the hood and will probably receive a Gingerbread flavoured update by the time T-Mobile gets it in June. So if you’re looking for a mobile phone that can power a laptop – 3 months is all you’ll have to wait 😉

The Samsung Galaxy Ace will be here next week as T-Mobile has it down for a March launch. The Ace is running on Android 2.2 Froyo, has an 800MHz processor and a 3.5-inch screen. Not exactly a top-flight phone but if you’re looking for a no frills, no fuss smartphone then you could do a lot worse than Sammy’s Ace.

If you’re not a T-Mobile customer then don’t worry. I’m sure the other operators will be getting some if not all (remember O2 has already nabbed the exclusive on the white SE Xperia Play) these handsets; it’s just that T-Mobile seem to be less shy with their dates 😉

Which would be your choice of phone out of this quartet?