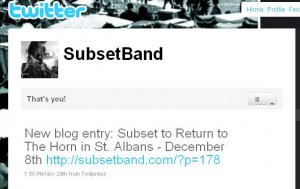 There’s definitely those for and those against the micro-blogging phenomenon but no matter which side you’re on chances are that you’ve uttered the ‘T’ word.

So much so that you’re responsible for making Twitter the most used English word of 2009!

Out of the 1.58 billion English speakers in the world, it looks like, plenty many are using Twitter and in doing so they have made the brand-name even more popular than the words: Obama and H1N1 – that’s swine flu to you and me.

The list has been compiled by the The Global Language Monitor who annually track the most popular words and phrases in the media and on the interwebs (including blogs and social media sites).

This has been helped, no doubt, by celebrities and “celebs” making and breaking news – from the adorable and gadget-friendly Stephen Fry to the…. errr… Jordan/Katie Price PR machine.

The most popular technology phrase for 2009 was â€œCloud Computingâ€ which came in at number 6 in the list of top 10 phrases. The most popular phrases of 2009 included â€œKing of Popâ€, â€œSwine Fluâ€ and â€œMayan Calendarâ€ (which ends its cycle on 12/21/2012 and is also a Hollywood flick featuring John Cusack).

â€œIn a year dominated by world-shaking political events, a pandemic, the after effects of a financial tsunami and the death of a revered pop icon, the word Twitter stands above all the other words. Twitter represents a new form of social interaction, where all communication is reduced to 140 characters,â€ said Paul JJ Payack, President of The Global Language Monitor.