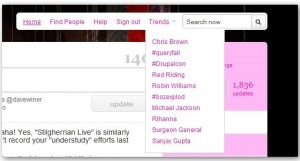 There’s word going round that some Twitter users have access to a seach box that has recently appeared in their toolbar up in the right-hand side of Twitter.com – they can also get a list of ‘trends’ – those hot Tweet topics that are blazing up the interweb.

Nothing’s appeared on mine yet but ReadWriteWeb has the search features enabled already and has kindly taken a screenshot.

Driving people to Twitter.com and away from those 3rd party apps such as Twitterific (which I use on my iPhone), TweetDeck and twhirlÂ that are all very popular ways to get Tweeting.

Driving traffic via the Twitter.com homepage will help them get more accurate traffic and usage numbers.

We shall wait and see if there are other reasons for them to drive people directly through the site as they have yet to unveil their business plan.