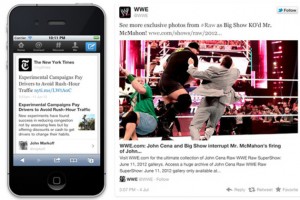 The reason why Twitter has become such a great place for breaking news is its 140 character limit – but now Twitter is partnering with big media companies to expand what can be shared in a single Tweet.

Twitter announced today that it has introduced expanded Tweets.

These allows companies such as The New York Times and Wall Street Journal to embed a headline and even the introduction to an article within a single tweet. That’s like cheating isn’t it?

Today it’s adding more content for media partners, new sources for video, and even embedded audio from Soundcloud links – ok, so that’s handy for bands which is a good thing 🙂

The expanded Tweets will be rolling out on Twitter’s website and mobile site today, and coming soon for iOS and Android.