Tweet via Satellite from Anywhere – Even with no Network Signal 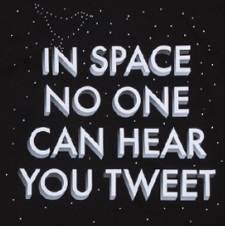 You know those times when you’re deep in the jungle or other remote part of the world, Barnsley for instance, and want to use Twitter but you have no signal. Well, now you can Tweet like using a satellite phone.

The micro-blogging site, in its quest for world domination using 140 characters or less, has now stuck its flag in to outer space.

Twitter has now signed up for the use of two satellites which will give you the ability to tweet even when you have no mobile signal.

Using a special code you’ll be able to Tweet from your regular mobile phone even when there is no connection from your network thanks to satellites Iridium and Thuraya. Bless ’em 🙂

This new Twitter feature is ideal for news journalists, people living in countries that block the use of social networks, and those without smartphones at all.

Granted, most of us will probably have use for the out-of-this-world service but it’s good to know it’s there, right?