Turn Your iPhone into a Geiger Counter? There’s the WikiSensor App for That 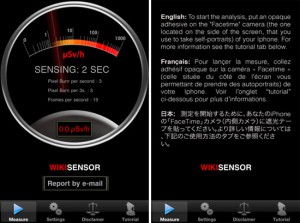 Now – I’m not saying that the WikiSensor will replace any kind of radiation detector – but it seems to work and it certainly looks good!

Hopefully the threat of radiation poisoning isn’t something that keeps you awake at night but you never know when someone in the pub will ask you “I wonder what the background radiation in here is?”

Probably not the most likely conversation starter but hey – stranger things happen, right?

The WikiSensor usese the iPhone’s front-facing camera as it doesn’t just record the light visible to the naked eye – it also captures Gamma and X waves (apparently) which tend to be emitted by more radioactive sources.

Once you have the WikiSensor Dosimeter downloaded to your iPhone, cover the Apple handheld’s front camera with black tape and then run the app.

What’s the black tape for? Well, that will block any ‘normal’ light but will still allow those Gamma and X waves through.

If these waves are picked up and recorded the software will let you know, and give you an idea of the risk.

Fun with science all for 69p