Turn Monitor or any Surface into a Touchscreen – up to 120 inches of Poke! 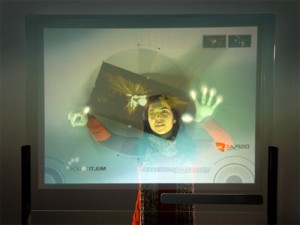 Ever feel like your puter could do with the touchscreen treatment?

But why stop there? Perhaps the kitchen cupboard or toilet door could be touchscreen pimped!

Before you say – “Jay, you be crayzeeeee mo fo!” Listen up.

A certain Portuguese company by the name of Displax has created a polymer film that can do just that, for up to 120 inch screens.

It doesn’t just have to be glass for this stuff to work â€” apparently plastic and wood can be made into an interactive screen!

As far as multitouchiness goes – I reckon 16 fingers making shapes on its surface and the fact that it can even recognise when someone blows across it should suffice.

If your brain is ready to go into melt-down those lovely folk from Wired explains the tech behind this stuff:

“A grid of nanowires are embedded in the thin polymer film that is just about 100 microns thick. A microcontroller processes the multiple input signals it receivers from the grid. A finger or two placed on the screen causes an electrical disturbance. This is analyzed by the microcontroller to decode the location of each input on that grid. The film comes with its own firmware, driverâ€“which connect via a USB connectionâ€“and a control panel for user calibration and settings.”

Displax reckons that the first screens using this boggle-your-mind cleverness should be on sale in July.

So – where would you give the touchscreen surface treatment to?

I need to know!