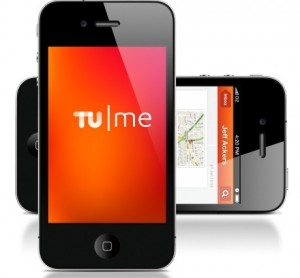 Tu Me ache. Full Tu Me. Tu Me aint baby talk, it’s free talk; and texts for that matter. All you need is an iPhone.

Tu Me has been created by O2’s parent company Telefónica and is a VoIP app to rival Skype and Apple’s own iMessage.

As long as you’re hooked up to Wi-fi all of your calls, texts and media messages are free. You can Tu Me using your data plan instead of your contract’s calling minutes and text message allowance too if you so desire. Personally, I like the idea of totally free 😉

You can store all your messages, conversations and interactions in a handy timeline format, which you can see in a browser as well as through the app in your phone.

All of your conversations are stored in the cloud rather than on your phone which is good for a number of reasons. This means you won’t lose them even if you lose your phone and it takes up none of your phone memory.

Cloud storage is free for the first year but you’ll start getting charged for it after twelve months. Ah, so there’s the catch.

The good thing is that you don’t have to be on O2 to take advantage of the app, and neither do the people you’re calling or chatting with.

This is defintely a sign of the times. Networks are starting to see that charging for data use is more profitable than trying to make their money out of calls and texts.

You’re ok if you’ve opted for something like Three’s all you can eat data plan but most of us are on capped contracts which could cost you a pretty penny should you go over your limit.

It’s another example of an app that arrives on Apple’s iOS devices first, but O2 promises Tu Me will launch for Android users and other platforms at some stage.

There are loads of VoIP apps out there already but O2 reckons Tu Me is the only one-stop shop.

The network claims that Tu Me is “the only app that lets you make calls, send voice messages, instant messages, photos and location from one control within one screen, with no need to switch apps or tabs.”

Well, I’ve downloaded it – have you? Let me know what you think about it.