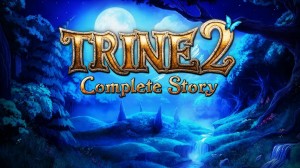 Once upon a time….

Kick back and relax as Trine 2: Complete Story opens up its pages to the Playstation 4 and rolls out a fantasy story filled with mystery and intrigue. Frozenbyte bring their platform puzzler to the PSN and what a beautiful gaming experience it is too.

Trine 2: Complete Story really is the complete story, as this time there are 50 trophies on offer, as opposed to the 13 trophies the PS3 offered you previously. Trine 2 encompasses a more rewarding and harder platinum this time around.

This being the PS4, you already expected lush, detailed environments and beautifully textured backdrops that run as far as the eye can see, but maybe not on this scale. Trine 2: Complete Story is a sight to see and runs at the beautiful 1080p at 60fps you’d hope for. As the story unfolds, each path becomes more inventive and more spectacular; vast green vegetation, deep blue waters and spiralling steps made of stone all serve as a welcome distraction. Trine 2 is simply gorgeous and completely justifies purchasing your new console on release day. Your time is spent walking through a mystical land where water can spawn giant snails, frogs the size of buildings and Jack and the Beanstalk type of vegetation surround you. It’s a fairy tale soundtrack that could put a child to sleep in milliseconds, one that flows throughout like the sweetest of lullabies. Trine 2 puts you in a child like state from the moment you enter. 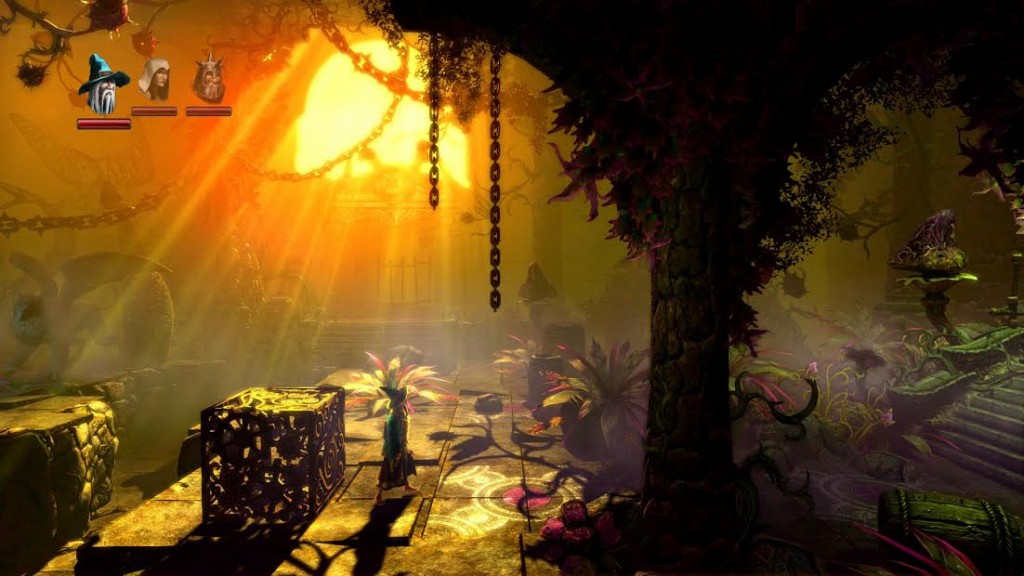 The story brings together 3 different characters. The trio consists of Amadeus, a wise wizard, Pontius, a bold knight, and Zoya, a thief. All are brought together by The Trine, which is a weird and wonderful magical glowing crystal. Each character is blessed with different skills. The wizard can levitate objects around your path and also summon rather impressive detailed iron cubes. The Knight is armed with a sword and shield, which are handy for battles and slaying advancing goblins. Zoya, even though portrayed as a thief, is still rather endearing and very useful with her grappling rope. Each storybook character can be switched instantly, bringing different abilities and strengths so you can decipher and clear the path ahead. 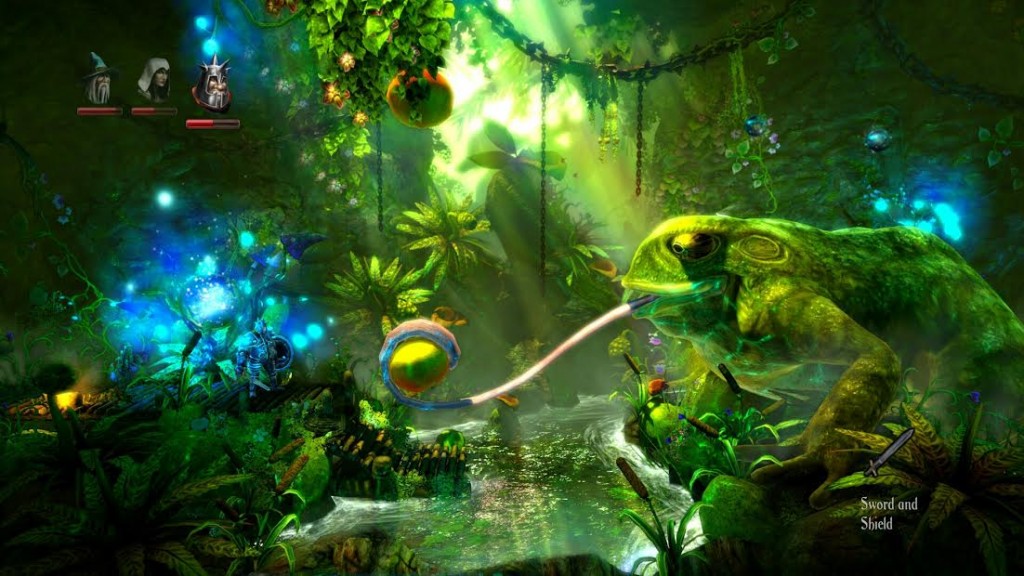 Narrated by the finest of English voices, a short insight to the game is given before each stage, then it’s left up to you and your solving abilities to venture forth. The story is not a fully fledged novel here, you won’t really mind nor care as the action starts almost immediately anyway. The puzzles whilst fun are pretty straight forward. You very rarely hit a stumbling block, so don’t worry. That being said, some puzzles will need assistance from each character. You may need the Wizard to levitate a glowing blue portal or pipe. Follow that with a click of the right trigger and you’ll seamlessly transform into the rope grappling Zoya, who can help climb up to an out of reach ledge. Follow that with a further change of face and you will become the Knight, where slaying the advancing goblins sees you pass through unscathed. It’s this approach that really keeps you interested in continuing your journey. The ‘what’s coming next’ factor plays heavily here. The Dualshock4 touch pad comes into play also – another new, added bonus that reminds you you’re playing next gen technology. Check points are frequent throughout which takes away any need to re-play levels. This feature really keeps the progress flowing nicely as no one likes redoing levels again and again, do they? 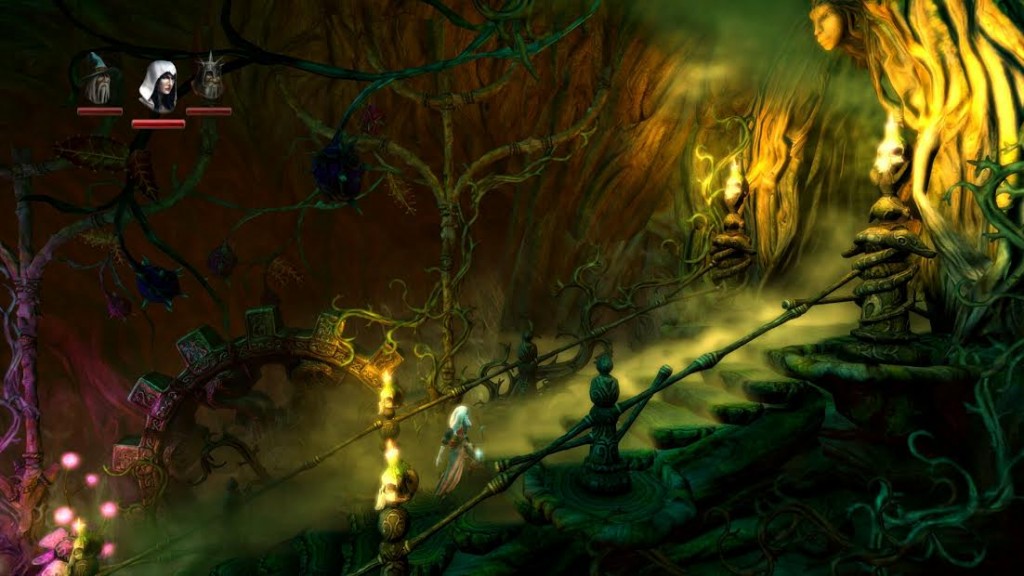 The collectibles in Trine 2 manifest into added powers for each character and some are more worthy than others. With a whopping 50 trophies on offer there’s going to be constant referrals to the trophy list. Remember, a double tap on the PS button sees you get back instantly from the trophy screen to gameplay.

The biggest niggle I found at times was trying to jump correctly and not fall short of my landing target. You really need precise timing to jump onto far away areas here and sometimes, using Zoya’s rope tricks became a trick in themselves that you need to perfect to master. As mentioned earlier, the puzzles themselves are not the problem, for me it was trying to execute the correct moves that proved more taxing.

The extra features of co-op, online, expansion packs and an added secret level ensure that this truly is a complete package for PSN gamers. The game running on PS Vita via remote play offers a playable version, but does lack the colour and bright sparkle its bigger brother offers. This is to be expected, but at least the remote play option is there. 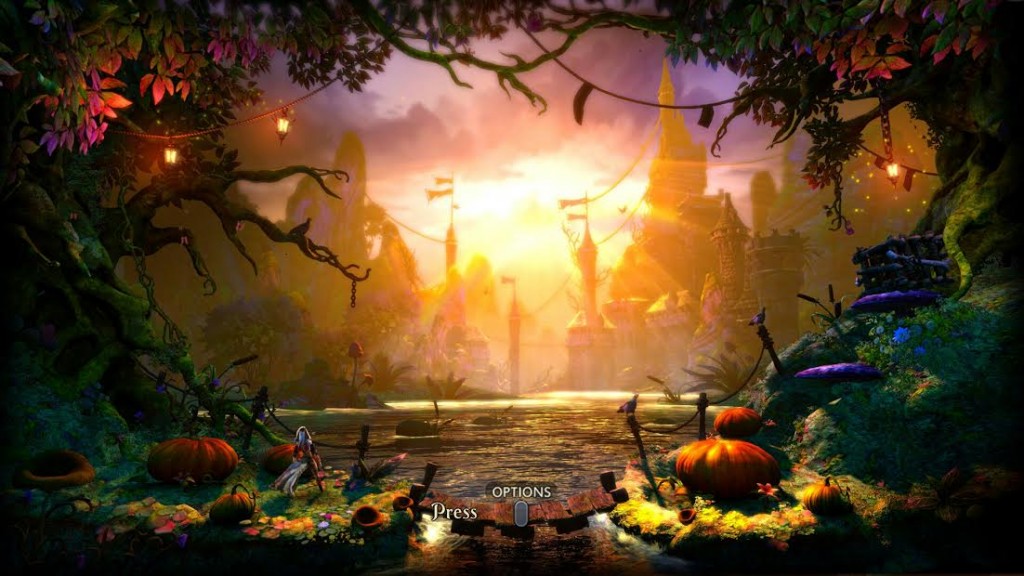 Frozenbyte have brought the biggest fairytale fetish filled with chapter’s of brute force to the PS4. Make no mistake, this is utterly brilliant and a must own game. Put your assault rifle down and forget saving the humans for a while. Get lost in a place and time where anything is possible. Trine 2 for PS4 is the complete story.