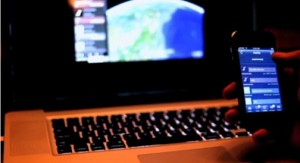 I’ve been a huge fan of Trent Reznor and Nine Inch Nails ever since I heard the single, ‘Down In It’ from Pretty Hate Machine.

I actually have everything released in order of the single’s or albums’s Halo number – FACT!

Trent has lead the crowd in releasing albums via Torrents and now, even though he’s not the first muso to do this, Mr Reznor is about to release a NIN iPhone app!

I already predict that this app will completely outclass any other band/musician branded application – if I’m wrong, let me know 🙂

As you’d expect from the house of NIN the app’s design looks very slick and contains all that Web 2.0 promised to be for musicians.

The app wraps up streaming music with custom playlists; a location-aware Twitteresque social network within Nine Inch Nail’s own network, fan-submitted images and media from every NIN concert ever (also location tagged); and of course, an iPhone-friendly version of the website within the app.

Not only is this great for fans of the multi-instrumentalist and his band it pretty much shows a glimpse into the future of music full stop.

And how is he able blaze this trail?

Well, as he rightly puts it: “anyone who’s an executive at a record label does not understand what the internet is, how it works, how people use it, how fans and consumers interact – no idea.”

The app will be free and should go live in the next couple of days after it gets final approval from Apple – Trent says that should happen “any minute now”.

They’re already working on Version 2.0 for iPhone 3.0, which will include Google Maps integration and Push notification.

Why not follow Trent Reznor on Twitter. He writes his own Tweets – this is how it should be!