Transport bike puts storage where the spokes should be 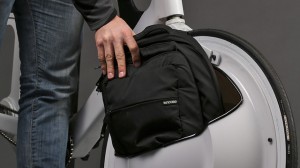 Living in London I know that there’s swarms (that’s the collective term, right?) of cyclists whizzing around on their commute, all with backpacks or courier bags slung over their shoulders. Panniers might not look cool and baskets are probably ok for old ladies and Hipsters but howabout shoving stuff in your front wheel?

Industrial Designer, David Hotard, has come up with a rather original idea for bike storage with his novel Transport bike which utilises space inside the bike’s front wheel.

Hotard, working with Matthew Campbell and Edwin Collier, had the idea of using a hubless bike wheel for their new transport but, instead of removing the spokes and leaving that space empty, they filled it with a storage compartment made out of lightweight vacuum-formed PET-G plastic.

So, instead of having to sling a bag over your shoulder whilst riding, you can shove it inside the bike’s in-built boot. Don’t worry about your stuff being treated to a fast spin – it’s only the tyre that actually moves. 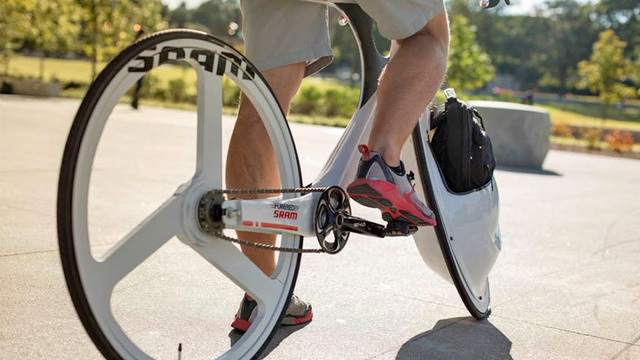 The bike itself weighs around 11.33 kilos, so it’s not going to replace your racer but the Transport’s creators claim that’s about as heavy as your average road bike, and better looking than the basketed Barclays Boris Bikes.

I am not sure how differently the bike would handle with a bag full of clothes, your laptop, etc sitting in the wheel but I guess it can’t be that different to having your bike fitted with front panniers and both the cycle Police and Paramedics use them.

Besides, this compartment might actually be better than panniers as it could have a lower centre of gravity.