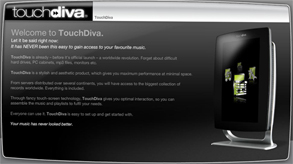 I’ve been pointed in the direction of this rather natty media device called the TouchDiva.

Nope, I’d not heard of it before either – which is worrying as it is supposed to be released in the UK and Europe in a matter of weeks!

The specs match the looks with the guts of a B&O in the two 125W ICEpower (Bang & Olufsen-manufactured) amps and that 15.4-inch touchscreen.

You pay a subscription ofÂ  around a tenner a month and for that you can download as much music as you wish.

The Danish manufacturers claim to have “agreements with the four major music companies in the world (Warner, EMI, Sony-BMG and Universal),” giving them access to over 2 million songs.

The Diva itself has just two buttons – on/off and a reset.

If you like the idea of having a touchscreen digital jukebox you’ll be looking to have to pay around Â£750 from December 1st apparently.