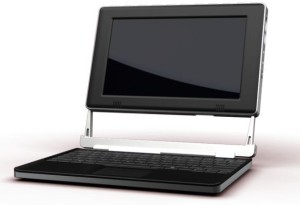 Here’s a rather natty bit of carry-about tech.

At first gawp it looks like JANB (Just Another Netbook).

But, if you’re eagle-eyed, you’d see that it doesn’t have that Intel Atom CPU – instead it has the ARM processor found in the likes of the Palm Pre.

The cleverness continues as the screen can detach from the keyboard section altogether.

Because it has that ARM chip, Always Innovating is promising up to 15 hours of battery life.

The operating system is a custom â€œTouch Book OSâ€ but the company says that as everything is open source you can whack pretty much what you want on it: Google Android, Ubuntu, Angstrom and even Windows CE if you are strange.Â  It will come with Mozilla’s Fennec browser.

The Touch Book is pretty silent as there’s no need for fans – memory is taken care of by the 8GB MicroSD card.

The touchscreen statement is, â€œThe Touch Book OS has two modes: one for use with keyboard and touchpad, and one for use as a standalone touchscreen tablet. The innovative 3D interface is easy to use and does not require a stylus or a skinny pinky.â€

The screen is also magnetic meaning that you can â€œput the tablet on the fridge to serve as a kitchen computer or digital frame.â€

The internal ports are for things like a wireless dongle or a USB thumb drive so you don’t have unsightly danglers.

The Touch Book will be available in â€œMay or June 2009â€ and will come in two versions; tablet only or netbook (tablet + keyboard).

The Touch Book is expected to ship in late spring and will start at $299. Advance orders can be placed at http://www.alwaysinnovating.com/store/.