Totally Cool NIT ZMP Robot Can Be Yours – Dear Santa…… 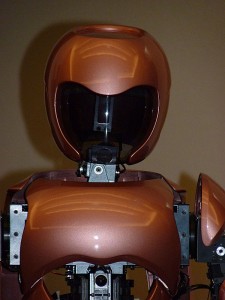 Japan and their robots – it’s a love affair. Just as long as they don’t take over!

This clever little humanoid comes thanks to a collaboration between various Japanese companies and institutions – the Nippon Institute of Technology, Harada Vehicle Design, ZMP and ZNUG Design.

If you’re thinking that ZMP is a familiar name – well, this droid is technically based on their open-source loving Nuvo robot.

The little fella is called the e-Nuvo WALK.

Power comes from a lithium ion battery which helps work the camera, a gyro sensor, an accelerometer, a distance sensor, an infrared sensor and a pyroelectric sensor in his body – best/oddly still he as a video projector in his body too!

He’s quite nimble as well having 21 joints (three in his head, six in each leg and three in each arm) and can naturally hear and talk. He stands 1.26m tall and weighs 15kg.

The bot runs on Microsoft Robotics Developer Studio and can be remote-controlled by Wi-Fi.

The idea behind this neat droid is for children to can learn about robotics through a real, finished product.

Check out the CrunchGear vid of the bot in action 🙂