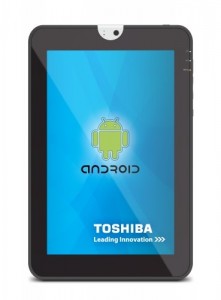 Toshiba as yet to even name their new tablet but that has not stopped Amazon slinging up details and pics aplenty on its retail site.

Under the hood is a Nvidia Tegra 2 dual-core processor with pictures being captured by means of the 5-megapixel rear camera and 2-megapixel front camera.

The Toshiba tablet is also equipped with stereo speakers, USB, mini-USB and HDMI ports with an SD-card slot for memory extension. You get support for Bluetooth and Wi-Fi as well as Adobe’s Flash Player. The expected GPS, compass and accelerometer are all accounted for and the tab will feature a removable battery for fast swapping should you be hammering the thing away from a power point.

Those suffering from ‘butter fingers’ will be pleased to read that the tablet comes with a handy (arf!) “easy grip non-slip interchangeable rubber backplate”. Perhaps they’ll follow up with different colours and designs?

As with any self-respecting mobile device these days, there will be a dedicated Toshiba App Place (original!) for you to procure your applications – you will, of course, be able to grab apps from Google’s Android Market.


Toshiba says that its App Place “complements the Android Market by providing a wide selection of widgets ranked by quality and popularity” – whilst also screening out apps that don’t work on the Tosh slate.

What Amazon fails to mention (as well as price, release date and name) is which version of Android the tablet will be running on. Personally I think that loading on anything other the Android 3.0 Honeycomb would be kinda daft.


“We are confident that we can match Apple pricing for their new iPad 2 while delivering a device that is richer in features,” he said. “We believe that our device is superior to the Apple device, it may be a little heavier (773g) but it does have a lot of features that the iPad 2 does not have.”

Looking at the spec do you think Toshiba have a chance with their Android tablet?

What price bracket would you expect it to fall in to?