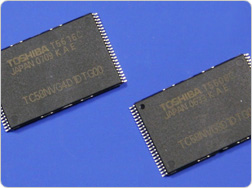 So, let me break it down.

Apple may also be dropping that much rumoured Apple tablet before Christmas according to some folk.

Those two points makes this report rather interesting.

To save you reading it the document says Toshiba will â€œramp upâ€ production of flash memory chips during the month of August.

Word on the street is that Toshiba is doing this so that it can fill a huge Appley order.

See – it’s gotta be for someÂ  new iPods hasn’t it?

Apple buys its flash from Toshiba – why else would Apple need all of that memory if not for new iPods?

Oh – except for that tablet 😉