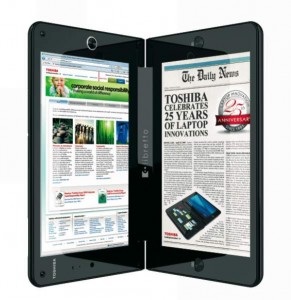 Now, here’s something that could actually shake the tablet and eReader world whilst also annoying Sony’s Vaio P.

You get a duo of 7 inch, LED backlit, multitouch screens which can run be run just like a regular laptop, with the main screen acting as a monitor, while the lower ones rocks a virtual keyboard. These screens offer up a res of 1024×600 pixels as well as haptic feedback (it vibrates a bit as you hit each key).

The coolness comes as you can actually boot two applications at once, letting you browse the web on one, while poking your pics in another.

Naturally you get an accelerometer so it’s totally down with being turned around.

Under the hood there’s a 2GB Pentium processor running Windows 7 Home Premium and storage is thanks to a 62GB SSD. There’s also a MicroSD slot.

Toshibaâ€™s LifeSpace software is utilised for controlling dual screen apps and a battery that runs to 3.5 hours.

It’s not quite pocket-sized at 202 millimetres across and 33.4 millimetres thick which isn’t much. Tosh says that it only weighs 819g so I’d say that it’s still extremely portable.

What I do notice from the pictures is that connectivity wasn’t high on the W100 wish-list. I can only spot the power input on the right and the 3.5mm audio and a solitary USB port on the left.

Word is that the Toshiba Libretto W100 will be out around August this year and as you’d expect not for cheap. I’m hearing word of $1,300ish!