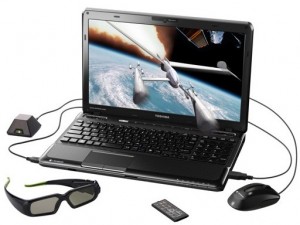 Well, it seems that the current trend of 3D has no signs of slowing down.

The Toshiba Dynabook TX/98MBL has claimed first prize in the race to be the worldâ€™s first notebook that lets you view 3D Blu-ray flicks and handle 3D gaming.

The 15.6 inch laptop has an LED backlit 120Hz panel which is split 60Hz to each eye when viewed through the active shutter glasses which will give you that 3D vibe. The screen scores a pixel count of 1366 x 768.

The 3D Tosh has a team consisting of NVIDIA’s 3D Vision software, GeForce GTS 350M hardware along with 1GB of dedicated video RAM. All of that is buddied up with WinDVD BD to play those 3D Blu-rays.

Under the hood you get a Core i7-740QM processor, 640GB of hard disk, up to 4GB of memory and a Blu-ray disc burner (how else were you going to spin those 3D discs?).

Sounds are pushed out thanks to some Harman/Kardon stereo speakers with Dolby Advanced Audio so your films and games should sound as special as the pictures look.

It will appear in Japan at the end of July but don’t expect this world’s first to be a budget model.

That price is including the special glasses and a remote control though.