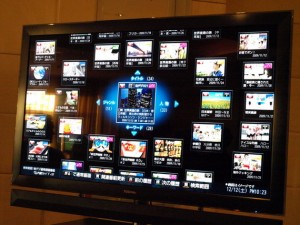 If you’re looking to spend a wad of cash on a fancy telly then, chances are, you’re the type of person that hates to miss their favourite programmes.

Toshiba hears you and has finally bounced out their very clever, next-generation Cell TV in Japan.

The reasons to be excited about this great goggle-box are many.

First of all there’s all that recording space: 3TB of it coupled with not one, not four but eight HD tuners! That’s because the Cell TV has been designed to record every one of Japan’s eight free HD channels, day and night, for a whole week. Oh my!

Basically you’d have to find eight weeks to watch everything you’ve recorded in one week which kinda means that you’d have even more catching up-to-do. But the ability is impressive all the same 🙂

As you may be aware, like digital radio, digital TV contains metadata which describes the content. So, it could suggest and record shows that are similar to the ones you watch already. You watch ‘Being Human’ so it might suggest ‘Supernatural’ – you watch ‘Fringe’ so it might nod at ‘Flashforward’ and give you a hint.

PS3 owners might be thinking “Cell TV; is that something to do with the Cell chip that’s in my gaming console?” and they’d be right. That speedy processor is shared by both chunks of gadgety loveliness which means that the Cell TV is able to perform picture processing that regular tv’s can’t and Toshiba claims that it can even turn 2D TV shows into 3D on the fly. Now there’s a clever trick!

The screen has a native resolution of 3840×2160 pixels so it’ll be able to handle the next generation of HD when it arrives and upscales 1080p video to fit its super high res eye-pleaser.

This all sounds rather spanky but I bet it costs a packet – Yup.

Toshiba told Crave that it’s working on which features to keep before sending them over to Blighty but the Japanese models are priced up to the equivalent of Â£10,000.

Can I be your friend?