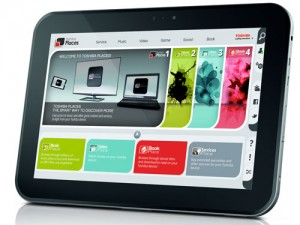 Toshiba has revealed its latest Android 4.0 Ice Cream Sandwich tablet, the AT300, complete with the quad-core goodness of Nvidia’s Tegra 3 processor and 1GB RAM in a body less than 9mm thick.

The Toshiba AT300 sports a 10.1-inch LED backlit display with a resolution of 1280×800 pixels, with 10-finger multi-touch support. That should cover any eventuality I reckon.

The screen itself is Corning Gorilla Glass, which should ensure it stays scratch free and all this is wrapped up in an 8.8mm thin aluminium shell which in total weighs a tiny 590g – a whole 63g lighter than the new iPad 3.

You get a 5MP camera on the tablet’s rear, with a 2MP offering on the front both buddied by LED flashes.

With its quad-core NVIDIA Tegra 3 processor, Toshiba is championing the AT300’s multimedia smarts, in particular with regards to gaming and HD video playback.

Toshiba has slipped in a fifth core which is employed to deal with the more mundane tasks. Tosh says that this will help extend the battery life to 10 hours.

The Toshiba AT300 also comes packed with ports – including a combo audio in/out jack, a micro HDMI output and a very handy full-size SDHT/SDXTSD card slot, as well as support for eMMC cards – handy for you photographers I should imagine 🙂

The AT300 will come in 16GB or 32GB flavours and have access to Android apps via Google Play as well as Toshiba Places, which is an alternative store for music, movies and eBooks.