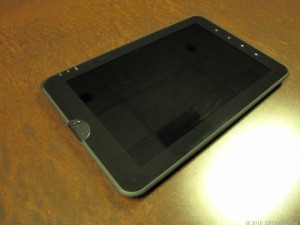 While there’s still uncertaintly as to whether smartphones will be getting Android 3.0 Toshibaâ€™s unnamed tablet has been groped before its official CES 2011 outing.

The 10-inch Honeycomb packing tablet was given a good going over by the folk from CNET.

To further please your peepers the new machine is loaded with Resolution+ video enhancement which hands the device upscaling tech to polish standard def videos to resemble HD colour and contrast ratios. Not enough? Howsabout the adaptive display technology Tosh sprinkled on top? This acts as an ambient light sensor which alters light and contrast in response to your environment so that you get the optimal pic.

As per the hardware requirements of Android 3.0 there’s an NVIDIA Tegra 2 dual-core processor under the hood.

The new tablet supports Adobe Flash as well as a multitude other bits including an HDMI port, USB, mini-USB, SD card, Wi-Fi, Bluetooth, stereo speakers and GPS with a digital compass all as standard.

Toshiba has given their new tablet dual cameras with a 2-megapixel front-facing snapper being joined by a 5-megapixel camera round back. No flash though.

It’s a bit chunkier and weightier than its rivals tipping the scales at 1.7 pounds but it seems to offer a little more.

It’s said to be out the first half of this year – what do you think? Tempted?