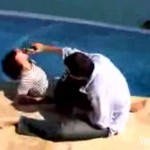 Twenty or so of the tech who’s-who partied large in Cyprusthis last week, and posted a lip sync video of the Journey song â€œDonâ€™t Stop Believingâ€ a couple of days ago.

All is cool so far.Â  A little sun, sea and no doubt a few beers.

Perhaps their timing could’ve been a tad better though.

The video was released just as Silicon Valley really began falling apart and the meltdown occured.

This was the week of eBayâ€™s 10% layoffs, Googleâ€™s stock nosedive, Yahooâ€™s self destruction, etc

More than a few people thought the ostentatious partying was in poor taste in light of the situation back home.

Now the video has been tagged private, which is what it should have been marked as in the first place.

But itâ€™s too late – the video has spread to YouTube and other sites, and wonâ€™t be disappearing again.

This may become the theme track and visuals for the end of Web 2.0.

Dance, Sing along and then cringe at the Official Bursting of Web 2.0 Bubble on video