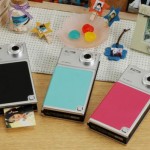 We bid farewell to the Polaroid camera and shakey-shakey developing film and the world has never been the same since.

The basic idea is still alive thanks to Tomy!

Tomy and Zink have joined forces to make the Xiao TIP-521, a digital camera with a printer built in.

The Xiao has an middle-of-the-road res of 5mp and will be up against Polaroid’s Pogo Zink offering.