Time Travel Now Possible in London – via AR and an iPhone 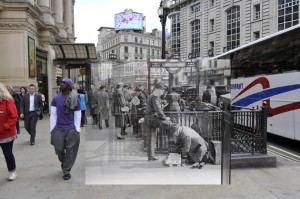 I’m always interested in the history of where I’m living – and now that I live in London I’m surrounded by it every day.

Sometimes though, looking through journals or museum exhibits isn’t enough. For me having history leap out at me as I walk around would be the ultimate – well, short of having loan of a TARDIS or Delorean anyhow 😉

The Museum of London has launched a gadgety way of being able to do just that thanks to some augmented reality and an iPhone – the app is called Streetmuseum.

All it takes, once you have the app installed, is for you to aim your iPhone at a historical landmark and you’ll see what it looked like back in the day.

Bombed out buildings being tended by the fire brigade, suffragettes fighting for womens rights and hippies generally loving everything appear amongst today’s tourists and locals.

The picture above is of a soldier getting his shoes shined in Piccadilly Circus in 1953 as the present day folk just walk by – well, it is London!

The AR element of Streetmuseum only works on the iPhone 3GS, but if you have an iPhone 3G you can still look at the map for historical information about the city. Drat!