TiLR Me – Your Boss Can Be There When They’re Not….. 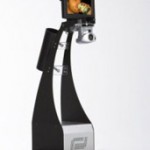 It’s such a very impersonal way of conducting meetings isn’t it?

All the people back in the conference room get is a screen with a window showing another window that contains your beautiful visage.

RoboDynamics, on the other hand, wants to popularise what they call â€œtelepresence,â€ and it necessitates inhabiting a robotic body in the room.

Ok, so it doesn’t really look like you – or anyone else for that matter.

So what if the TiLR looks like a proto-Dalek with a flatscreen for a face?Â  The idea itself is fab and a little scary.

You’d be able to scoot around, tilt and pan its camera, and talk face to face with people in the remote environment……….I’d rather be the one controlling the droid and not the one being faced with it to be honest!

Although I canâ€™t see a boss cruising down the office halls â€œinâ€ this thing, waving virtually to employees and stopping into cubicles to check in I can see some positives

I’m guessing it’s a helpful idea if the CEO works from the HQ in another continent but still would like to have a presence at the Christmas party or hand out awards and such as well as roaming around the conference table.

Why don’t we all just work from home and have these back at the office?…………….