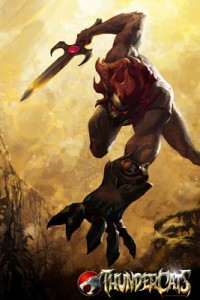 Get ready to dust off the Sword of Omens fans of fearless felines!

It sounds like the Cartoon Network has commissioned a new version of the awesome 1980s animated series “ThunderCats” from Warner Bros. Animation.

I’m soooooooooo excited – Thundercats were up there with He-Man, Ulysses 31 and Battle of the Planets for me 🙂

The rebooted Thundercats will still combine swords and science in the battle between good and evil for the Stones of Power.

WBA will partner on the project with Studio 4C – that’s the Japanese animation studio who brought us “The Animatrix”.

“In addition to being Warner Bros. Animation’s first anime series, ‘ThunderCats’ marks our most ambitious foray yet into fantasy,” said Sam Register, executive vp creative affairs at WBA. “The realism and dynamic visual style we’ve achieved are sure to thrill viewers, and the cool weapons, vehicles and technology should help the show appeal to a diverse audience.”

I hope that the new series gets an equally rocky theme tune as the original.

Surely this is something that even Snarf will be happy about.