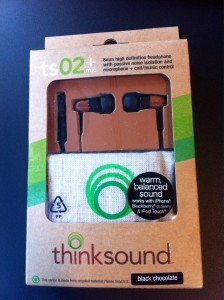 I’ve tested a range of earphones and headphones and, whether they’re a set of Beats by Dre, Bluetooth or wired AKG’s, or Music Fidelity’s EB-50 monitor-grade earphones, they have all been reviewed based on sound quality and comfort – this is the first time I will have had to consider how eco-friendly they are. That’s exactly what the ts02+mic from Thinksound wants to provoke.

Thinksound have already managed to distance the ts02+mic earphones from the rest thanks to their green credentials. Right from the recyclable packaging – including cables tied with what appeared to be unbleached string (perhaps hemp) to the wooden casing of the earphones themselves, Thinksound has attempted to ensure that every aspect underlines just how tree-friendly these ear-pleasers are.

As soon as you stamp the words ‘organic’, ‘free range’ or ‘eco-friendly’ on to something the price tends to stop being wallet-friendly.

Personally, I think that just over £77 is a respectable price, depending how good they sound, for some free-range earphones. 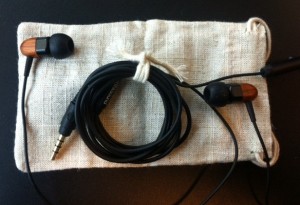 The Thinksound ts02+mic earphones are not only packaged in recycled material but the amount of packaging has been kept to a minimum. Even the carrying case is made from cotton rather from some man-made material.

The wooden casing of the earpieces has the twofold benefit of coming from a renewable source, and providing a resonant and warm material for encasing the Thinksound ts02s’ 8mm drivers.

Even if you couldn’t care less about any of that – the ‘chocolate’ (dark wood) ones I tested got some inquisitive people asking how much they cost as they do look like top-flight earphones.

Sticking with the environmentally friendly stance, the plastic used in the cables of the Thinksound ts02s is PVC-free.

I am not sure how green the silicone tips are – but there’s four sizes bundled in with the ts02s so that you should get a nice and comfy fit. 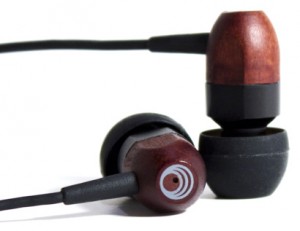 The first thing that I could tell from the Thinksound ts02 earphones was that there was a lot more bass-presence compared to my usual choice of more neutral sound sources.

I did a bit of homework and discovered that Thinksound was co-founded by an ex-Chief Sound Engineer of V-Moda – so there’s no real surprise that the tonality of these earphones would favour phat bass.

Don’t be put off though. I am not talking Beats by Dre bass tendancies here by any stretch of the imagination. In fact, trialling them through a range of tracks by the likes of The Who, Massive Attack, The Prodigy, SUBSET, Victor Wooten, Prince, NIN, Lamb and David Lee Roth, to name but a few, I found that the sound produced was warm, rather than bass-laden.

The warm and capable bass, however, tends to show-up the lack of high and high-mid definition especially if you go for more acoustic artists such as Sarah Harmer, Tori Amos, William Elliot Whitmore, for instance. But, for me, it was when listening to tracks by Max Richter or string and piano music such as Jean Sibelius’s Four Pieces, Op 78 Religioso that the imbalance was most noticeable.

To be honest, if you wanted total definition then you wouldn’t be listening to the latter things on MP3 and, for 90% of what I put through the ts02s, I found they produced a comfortable sound with good bass response.

The in-line microphone does its job well and, even though there’s a single button rather than full in-line controls, there was nothing really to grumble about here.

Being loaded with just that button which, on iPhone, takes care of pause (one press), skip (double click), back (triple click) it means that they are compatible not only with iPhones and iPods as you’d expect, but also with BlackBerry’s sporting a 3.5mm jack, and most of the Droid handset range.

Even if you think that they’re trying too hard to win the green vote (which can never be a bad thing no matter how you look at it), the Thinksound ts02+mic earphones offer decent build quality and the sound reproduction is nice and warm and gives a decent amount of bass without being overpowering.

I would say these were more for ‘popular’ music such as your rock, pop, R&B, etc than for your acoustic or classical outings. The cable is a decent length and these have become my earphones of choice when working at my PC.

All-in-all, the Thinksound ts02+mic should appear on your list when looking for new buds.