Thinking about buying a Microsoft Surface tablet? Wait a little while – it could get cheaper! 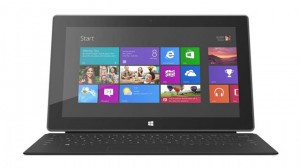 Not great news for Microsoft, but potentially pocket pleasing for those of you that fancy buying one of their swanky Surface Tablets. It looks like MS is sitting on around 6 million of these devices which seem to have been a financial disaster for them.

Microsoft has officially reported that, in its latest set of accounts, MS booked a $900m loss in the last business quarter thanks to its spectacular hardware flop .

The hole in the accounts was mentioned in the first paragraph of Microsoft’s latest figures, with the tech giant stating that the loss was “related to Surface RT inventory adjustments,”.

I am taking the “inventory adjustments” is more than a nod to the fact that there’s loads of the Surface slates sat, unsold, in a variety of warehouses and stockrooms across the planet.

That would also go someway to explaining the recent price cut that saw the price of the standard tablet drop to £279 in the UK in an attempt to shift some and get some money in the MS account.

I would suggest holding out a little longer before purchasing a Surface if you can as.  the RT version at least, might go the way of the PlayBook and hit the £99 mark before the summer’s out.

I wonder if this is why we’ve not seen the much-rumoured 7-inch Surface just yet?

I’m waiting to see if the Pro comes down too – how about you?