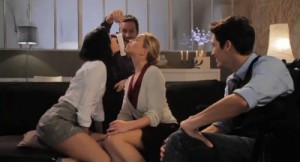 The amount of times I’ve heard my gaming buddies dis the Nintendo Wii as purely for casual gamers or those too old or too young for ‘real’ games.

Perhaps after seeing the advert below for the game ‘We Dare‘, which shows beautiful people spanking each other and a bit of suggested mild lesbianism, they might change their mind. Especially as the clip ends with a strip show!

Yup – gone are the happy families, TV celebrities and lots of fluffiness that usually litter Nintendo Wii ads only to be exchanged for titillation and post-dinner party frolics for Ubisoft’s We Dare.

Ubisoft terms We Dare as â€œa sexy, quirky, party game that offers a large variety of hilarious, innovative and physical, sometimes kinky, challenges,â€ The gameâ€™s developers go on to state: â€œThe more friends you invite to party, the spicier the play!â€

No doubt We Dare will hit middle England’s suburbia and bring those dinner parties to a crescendo of kinky, swinging try-sexual foreplay. Remember to encase your wand and play safe 😉

As the antics are really down to how far you and your guests want to take We Dare – the game has been handed a PEGI-12 rating making the game suitable for gamers aged 12 and over.

Anyone fancy a quick game?